I love reading crime novels but just don't get the time to read that many. One of my favourite crime authors is Jo Nesbo and his Harry Hole series - if you haven't read any yet, it's a great series to get into and would make a great gift for someone who loves this genre. 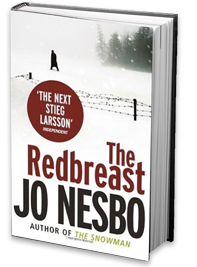 I had thought The Redbreast: A Harry Hole Novel was the first but it was the first to be translated into English. The Bat is the first of the series and was translated some months ago. It is good but not as gripping as the others, you can tell it is a first novel I guess.  The Cockroaches is the second but as far as I know it hasn't been translated yet. There are 8 in total with Phantom being the last.

The novels are set in Norway, yet another successful crime series from a Scandanavian author. Each novel can stand on its own as the main detective, Harry Hole, delves deep into yet another murder, battles with alcohol, disobeys orders from his superiors, is threatened with suspension, falls in love, misses his true love Rakel and her son and in the end, solves the crime but is scarred in some way, be it the loss of a co-worker, the breakdown of a relationship or a battle with alcohol. The series has an underlying story line of suspected corruption in the police force which isn't fully solved until the last couple of novels.

Some of the books  are quite gruesome. We may not know the character well enough to be badly affected when she or he is slaughtered but yet the descriptions can be gruelling to read at time. I think the most gruesome (and perhaps the best) were The Leopard

is hte last novel in the series, I was a little disappointed in the ending initially but when I thought about it, it was left open enough to not be twee and had plenty of surprises as well as disappointments. Having read the full series, part of me wanted a happy ever after but although it is fiction, it perhaps reflects life more than we would like it too.
Posted by Lorna at 5:53 AM