Review of The Chastitute by J B Keane

The Chastitute by J B Keane is a play which although extremely funny, is also poignant and sad.  The term 'chastitute' is a man who is not in holy orders and yet is celibate. The Chastitute is this play is a John Bosco, a bachelor farmer in Ireland, in his 50s and desperate for female company. It is not just sex that he desires, it is having someone to share his supper table with and talk to.
Like many other farmers of his generation, he didn't have the funds nor the social skills to secure a wife when he was younger. Looking after his mother until she died too meant that he was less desirable to other women as a potential husband. 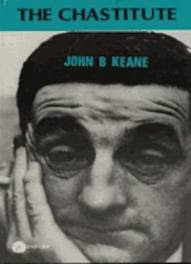 would be a funny play to watch - from John Bosco's escapades with a prostitute, his reflection on his unsuccessful courtships such as being left holding a string of rosary beads, his conversations with his matchmaker and another villager who attempts to matchmake but fleeces him, his uncertain attempts to court his new housekeeper.  Nevertheless, it reflects a Ireland of isolated and lonely bachelors, men for whom a lost love had departed for the bright lights of a city, for work and another potential husband.  Men who, by their own admission, were past their best and dreaded another couple of lonely decades.
Has much changed over the decades? Not if the recent film Pilgrim Hill is to be believed.
It certainly is a reflection on Ireland, both sad and humourous. Go and see it if you have a chance and if not, give it a read.
Posted by Lorna at 1:28 PM

Email ThisBlogThis!Share to TwitterShare to FacebookShare to Pinterest
Labels: irish farmers, j b keane, pilgrim hill, review of the chastitute, the chastitute