for many years and having read it again, I was wondering why I'd left it so long!  I'm writing a book review of it so you won't leave it, do read or reread. So many people say that Pride and Prejudice is their favourite but I felt this was just as good. 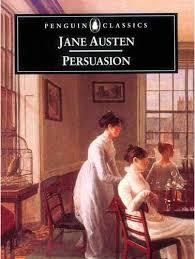 Better in fact, in many ways, as we all know that Elizabeth Bennet ends up with Mr Darcy as Pride and Prejudice is so well known. Even if people haven't read the book, they'll know of the happy ending from the many film versions.
However, Persuasion has that 'will they, won't they?' feeling to it. Anne Elliott was dissuaded from marrying her true love Frederick Wentworth when she was 19, partly because of her family's snobbery and the fact that his future wealth and position was uncertain. She is very close to a family friend who acts as a surrogate mother and is convinced not to marry. They don't meet again until she is 27 and we, the readers, feel for Fanny as we're told she has lost much of her youthful bloom and good looks. She seems to be bullied by her eldest sister and acts as a sounding board to her moaning married younger sister.
The tables have turned by then, Frederick Wentworth has returned from the Napoleonic wars, wealthy and successful. Due to Anne's foolhardy and vain father who has overspent, the family have to lease their home and move to Bath. As would happen, their house is taken by an Admiral and Mrs Croft, of course, Wentworth is Mrs Croft's brother and hence their paths cross again.
As Anne stays with her sister, she and Wentworth end up meeting many times. Nobody knows of their previous relationship and she is forced to listen to people wondering which lady he will marry, she has to watch him flirt with others. However the tides turn when they are in Lyme and Wentworth's attention is caught when she is admired by a stranger. That stranger turns out to be an estranged relation who is Anne's father's heir and when they meet again in Bath, I found myself wanting to shout 'No' as Anne and William Elliot spend more time together.
As we are privy to Anne's thoughts but not to Wentworth's, we don't know whether he still loves Anne or not, until the final chapters.
Will she or won't they? Persuasion: Jane Austen

is a love story filled with excellent characterisation, wit, irony and humour.  Do read or reread it - it has just become my favourite of her six novels again.
Posted by Lorna at 3:22 PM