Little House on the Prairie Books by Laura Ingalls

Looking through boxes of books in the attic for a school book sale, I came across all the Laura  Ingalls books I had as a child and reread them all over Christmas. My daughter loves watching the occasional episode of 'Little House on the Prairie' and has started the first book 'Little House on the Big Woods'. 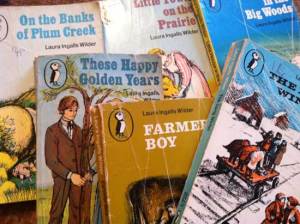 Reading the books as an adult means a much different interpretation than reading as a child. Reading them years ago, I was envious of Laura's adventures as they journeyed across the Wild West. Rereading it now makes me much more respectful of the dangers. Imagine heading off in a wagon into virtually unknown territory with 3 little girls and all you own in the wagon - facing dangers such as wild wolves, hostile Indians and many other perils. Their wants were simple, as a family they wanted to be more or less sustainable and live 'like kings' by killing and eating wild animals. Although things like nails needed to be purchased, they traded items like furs in the early days. Moving back out of Indian country, settling nearer to towns, meant that they became more dependent on suppliers.

Laura clearly had a penchant for storytelling. Telling tales of Pa playing the violin, building claim shanties, being lost in the snow, being chased by wolves, stories of how Mr. Edwards crossed a river to bring them gifts from Santa Claus, when they all got malaria, the personality of Jack their dog, their relationship with other families, the isolation from relations, the hints of Ma's worry when Pa was lost in a blizzard, the relentless cold and survival during the 'long winter', Mary's blindness, Laura's first teaching job and how she realised the importance of a genuine smile, her dislike of Nellie and her romance with  Almanzo.   Yet so much was left out - the death of Frederick (when Laura was young), the birth of  Grace.  Each book picks up in a new area or with a new experience.

What also struck me was how they made so much - such as sewing sheets, sewing all their clothes, making much treasured gifts for each other, using everything from every animal.  The high educational standard was evident too - starting school late yet the difficult words they learnt to spell, the detail in history and geography, the mental arithmetic - has it all been dumbed down in recent years??

Farmer Boy is about Almanzo's boyhood, starting when he was nine and his love for horses and farming was evident throughout. The Wilder family seemed much more affluent than their neighbours and seemed to be well respected. Living in a relatively large house, banking money every year and having the largest stable at the church to shelter their horses in, with the older children going to an academy, they seemed much more wealthy that Almanzo was in later life.  While stories of Laura's childhood recorded the killing of animals for food, Almanzo's childhood seemed to be centred around food - it records what they ate for many meals as well as the hard work involved in using absolutely everything they produced. Creating clothes from the sheep's wool, butter for sale from the milk, jams, preserves, ice.

The stories have such a charm, they are perfect for children to read and I thoroughly enjoyed rereading them too. My set of Laura Ingalls books, as you can see, is extremely tattered and well worn - I was even eyeing up a new set of Little House / Laura Ingalls Wilder Box Set